What is Temperature Inversion?

An atmospheric condition in which the typical lapse rate(The rate at which the temperature decreases for each unit increase of height in the atmosphere. In the troposphere the average rate is approximately 6.5°C per 1000 m.)

is reversed and temperature increases vertically through a given layer. In the troposphere an inversion layer marks conditions of great stability, i.e. a region in which vertical motion is strongly damped, with an absence of turbulence. An inversion acts as a ceiling, preventing further upward convection, and is generally the limit for cloud development. Such situation may occur near the earth’s surface or at greater height in the troposphere but the inversion of temperature near the earth’s surface is of very short duration because the radiation of heat from the earth’s surface during day­time warms up the cold air layer which soon disappears and temperature inversion also disappears.

Thus, temperature inversion is clas­sified into the following types on the basis of relative heights from the earth’s surface at which it occurs and the type of air circulation:

Ground surface inversion also called as ra­diation inversion occurs near the earth’s surface due to radiation mechanism. This is also called as non- advectional inversion because it occurs in static atmos­pheric condition characterized by no movement of air whether horizontal or vertical (it may be noted that air is never static).

Such inversion normally occurs during the long cold winter nights in the snow-covered re­gions of the middle and high latitudes.

In fact, surface inversion is caused due to excessive nocturnal cooling of the ground surface due to rapid rate of loss of heat from the ground through outgoing long-wave terrestrial radiation.

Thus, the air coming in contact with the cool ground surface also becomes cold while the air layer lying above is relatively warm. Consequently, tem­perature inversion develops because of cold air layer below and warm air layer above

The ground surface inversion occurs under the following condi­tions:

(iv) Slow movement of air, so that there is no transfer and mixing of heat in the lower layers of the atmosphere.

Ground inversion occurs in the low latitude areas (tropical and subtropical areas) during winter nights only and the inversion generally disappears with sunrise but sometimes it persists upto noon.

The inversion occurs up to the height of 30-40 feet in the low latitudes, a few hundred feet in the middle latitudes and half a mile in the high latitudes. It is apparent that the duration and height of surface inversion increase poleward. This inversion promotes stability in the lower portion of the atmosphere and causes dense fogs.

Tropopause/Upper Air Inversion: Tropopause is the layer that separates Troposphere from Stratosphere.

It’s from this part of the layer that ozone starts developing by absorbing UV rays from sun and it extends to almost top layer of the Stratosphere.

It’s mainly because of the absorbed UV rays by Ozone that increases temperature in the Stratosphere with increasing height and a cause of thermal inversion at Tropopause.

The thermal upper air inversion is caused by the presence of ozone layer lying between the height of 15 to 35km (even up to 80km) in the stratosphere. The ozone layer absorbs most of the ultraviolet rays radiated from the sun and thus the temperature of this layer becomes much higher than the air layers lying above and below ozone layer.

This inversion occurs only when there is no vertical movement of air (either ascent or descent of air).

This type is further divided into 3 subtypes on the basis of the nature of air move­ments e.g.:

(i) Frontal or cyclonic inversion,

(ii) Valley inversion due to vertical movement of air, and

(iii) Surface inversion due to horizontal movement of air.

(i) Frontal or cyclonic inversion is caused in the temperate zones due to temperate cyclones which are formed due to the convergence of warm westerlies and cold polar winds in the northern hemisphere. The warm air is pushed up by the cold polar air and thus the warm air overlies the cold air because it is lighter than the cold air. Thus, the existence of warm air above and cold air below reverses the normal lapse rate (decrease of temperature with increasing height) and inversion of temperature occurs.

(ii) Surface inversion of temperature caused by horizontal movement of air occurs in several situa­tions. Such inversion is caused when warm air invades the area of cold air or cold air moves into the area of warm air because warm air being lighter is pushed upward by relatively denser cold air.

(iii) Valley inversion generally occurs in the mountainous valleys due to radiation and vertical movement of air. This is also called vertical advectional inversion of temperature. The temperature of the upper parts of the valleys in mountainous areas becomes exceedingly low during winter nights because of rapid rate of loss of heat from the surface through terrestrial radiation.

Consequently, the air coming in contact with the cool surface also becomes cool. On the other hand, the temperature of the valley floor does not fall consid­erably because of comparatively low rate of loss of heat through terrestrial radiation. Thus, the air remains warmer than the air aloft and hence the warm and light air of the valley floor is pushed upward by the descend­ing cold and heavier air of the upper part of the valley.

Fig. 34.2 explains the mecha­nism of valley inversion of temperature: 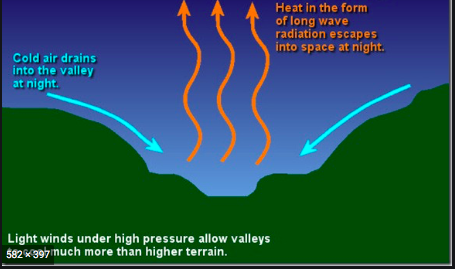 Though inversion of temperature denotes local and temporary conditions of the atmosphere but there are several climatic effects of inversion which are of great significance to man and his economic activities.

(1) Fog is formed due to the situation of warm air above and cold air below because the warm air is cooled from below and resultant condensation causes the formation of tiny droplets around suspended dust particles and smokes during winter nights. The smokes coming out of houses and chimneys intensify fogs and become responsible for the occurrence of urban smogs.

When smog is mixed with air pollutants such as sul­phur dioxide it becomes poisonous and deadly health hazard to human beings. The incidents of deadly urban smogs of December 1930 in Meuse Valley of Belgium (600 people fell ill and 63 people died), of October 26, 1948 at Donora in Pennsylvania (USA), and of 1952 in London (causing 4000 human deaths) tell the ordeal of urban smogs. Fogs are also formed at the convergence of warm and cold ocean currents.

For example, dense and extensive fogs are formed near Newfoundland due to convergence of warm Gulf Stream and cold Labra­dor Current. Fogs reduce atmospheric visibility and thus they are responsible for several cases of accidents of air crafts while taking off and landing and ships in the oceans.

(2) Inversion of temperature causes frost when the condensation of warm air due to its cooling by cold air below occurs at temperature below freezing point. Frost is definitely economically unfavourable weather phenomenon mainly for crops because fruit orchards and several agricultural crops such as potatoes, toma­toes, peas etc. are totally damaged overnight. There are frequent cases of destruction of fruit orchards in the lower parts of valleys due to severe frost caused by inversion of temperature in California (USA). Fruit orchards were severely damaged in California in the year 1913, 1917 and 1923 due to severe frosts.

The valley floors in the hills of Brazil are avoided for coffee cultivation because of frequent frosts. Alternatively, coffee is planted on the upper slopes of the valleys. The upper parts of the valleys are inhabited in Switzerland while lower parts are avoided. In fact, the upper slopes of valleys are characterized by fruit orchards, hotels and motels (for tourists), various resort centres etc. while the lower slopes are deserted.

(3) Inversion of temperature causes atmospheric stability which stops upward (ascent) and downward (descent) movements of air. The atmospheric stability discourages rainfall and favours dry condition. The inversion of temperature caused by the subsidence of air resulting into anticyclonic conditions increases aridity. This is why the western parts of the continents situated between 20°-30° latitudes and characterized by anticyclonic condition represent most widespread tropical deserts of the world.