Volcano-The word volcano comes from the name of Vulcan, the ancient Roman god of fire.

A volcano is an opening in Earth’s crust that allows molten rock from beneath the crust to reach the surface. This molten rock is called magmawhen it is beneath the surface and lava when it erupts or flows from a volcano. Along with lava, volcanoes also release gases, ash, and rock. It’s a super hot mix that can be both incredibly destructive and creative.

Volcanoes form at the edges of Earth’s tectonic plates. These huge slabs of Earth’s crust travel atop the partly molten mantle, the layer beneath the crust.

Cinder cones are the simplest type of volcano. They are built from particles and blobs of congealed lava ejected from a single vent. As the gas-charged lava is blown violently into the air, it breaks into small fragments that solidify and fall as cinders around the vent to form a circular or oval cone. Most cinder cones have a bowl-shaped crater at the summit and rarely rise more than a thousand feet or so above their surroundings.

Some of the Earth’s grandest mountains are composite volcanoes–sometimes called stratovolcanoes. They are typically steep-sided, symmetrical cones of large dimension built of alternating layers of lava flows, volcanic ash, cinders, blocks, and bombs and may rise as much as 8,000 feet above their bases.

Some of the most conspicuous and beautiful mountains in the world are composite volcanoes, including Mount Fuji in Japan, Mount Cotopaxi in Ecuador, Mount Shasta in California, Mount Hood in Oregon, and Mount St. Helens and Mount Rainier in Washington.

Most composite volcanoes have a crater at the summit which contains a central vent or a clustered group of vents. Lavas either flow through breaks in the crater wall or issue from fissures on the flanks of the cone. Lava, solidified within the fissures, forms dikes that act as ribs which greatly strengthen the cone.

The essential feature of a composite volcano is a conduit system through which magma from a reservoir deep in the Earth’s crust rises to the surface. The volcano is built up by the accumulation of material erupted through the conduit and increases in size as lava, cinders, ash, etc., are added to its slopes.

When a composite volcano becomes dormant, erosion begins to destroy the cone. As the cone is stripped away, the hardened magma filling the conduit (the volcanic plug) and fissures (the dikes) becomes exposed, and it too is slowly reduced by erosion. Finally, all that remains is the plug and dike complex projecting above the land surface–a telltale remnant of the vanished volcano.

An interesting variation of a composite volcano can be seen at Crater Lake in Oregon. Following a series of tremendous explosions about 6,800 years ago, the volcano lost its top. Enormous volumes of volcanic ash and dust were expelled and swept down the slopes as ash flows and avalanches. These large-volume explosions rapidly drained the lava beneath the mountain and weakened the upper part. The top then collapsed to form a large depression, which later filled with water and is now completely occupied by beautiful Crater Lake. A last gasp of eruptions produced a small cinder cone, which rises above the water surface as Wizard Island near the rim of the lake. Depressions such as Crater Lake, formed by collapse of volcanoes, are known as calderas. They are usually large, steep-walled, basin-shaped depressions formed by the collapse of a large area over, and around, a volcanic vent or vents. Calderas range in form and size from roughly circular depressions 1 to 15 miles in diameter to huge elongated depressions as much as 60 miles long.

Shield volcanoes, the third type of volcano, are built almost entirely of fluid lava flows. Flow after flow pours out in all directions from a central summit vent, or group of vents, building a broad, gently sloping cone of flat, domical shape, with a profile much like that of a warrior’s shield. They are built up slowly by the accretion of thousands of highly fluid lava flows called basalt lava that spread widely over great distances, and then cool as thin, gently dipping sheets. Lavas also commonly erupt from vents along fractures (rift zones) that develop on the flanks of the cone. Some of the largest volcanoes in the world are shield volcanoes.

The Hawaiian Islands are composed of linear chains of these volcanoes including Kilauea and Mauna Loa on the island of Hawaii– two of the world’s most active volcanoes. The floor of the ocean is more than 15,000 feet deep at the bases of the islands. As Mauna Loa, the largest of the shield volcanoes (and also the world’s largest active volcano), projects 13,677 feet above sea level, its top is over 28,000 feet above the deep ocean floor.

In some eruptions, basaltic lava pours out quietly from long fissures instead of central vents and floods the surrounding countryside with lava flow upon lava flow, forming broad plateaus. Lava plateaus of this type can be seen in Iceland, southeastern Washington, eastern Oregon, and southern Idaho. Along the Snake River in Idaho, and the Columbia River in Washington and Oregon, these lava flows are beautifully exposed and measure more than a mile in total thickness.

Volcanic or lava domes are formed by relatively small, bulbous masses of lava too viscous to flow any great distance; consequently, on extrusion, the lava piles over and around its vent. A dome grows largely by expansion from within. As it grows its outer surface cools and hardens, then shatters, spilling loose fragments down its sides. Some domes form craggy knobs or spines over the volcanic vent, whereas others form short, steep-sided lava flows known as “coulees.” Volcanic domes commonly occur within the craters or on the flanks of large composite volcanoes.

Intrusive Landforms of Volcanoes:
Intrusions or plutons include those molten rock materials that solidify or cool before reaching the surface of the ground. These igneous processes are collectively referred to as plutonism. Large intrusions are sited deep and appear on the surface by the uplift of the land they intrude or by the process of erosion. They become a dis-tinctive landscape because of their resistance to erosion compared to the other, weaker surround- ing rocks. These resistant rocks often form the core of mountain chains.
Intrusions are classifed by their shape and their location in relation to the rock layers they intruded  Large intrusions are circular in shape. Small intrusions without any particular shape are called stocks and cover an area less than 100 km2. Large ones that cover an area greater than 100 km2and mostly have granite in their
composition are known as batholiths. They are associated with metamorphosing or melting adjacent rocks while they develop under the land surface. The best examples of batholiths can be found in California; for example, the Sierra Nevada Batholith is a continuous granitic form.
Another larger batholith is located in the Coast Mountains of western Canada, and stretches for about 1800 km to southeastern Alaska. The other type of intrusion is related to the injection of magma into fractures and between two layers of sedimentary rock without changing
the surrounding rocks. A laccolith is associated with the horizontal fow of magma between two
layers of rock in a bump shape. These sedimentary layers are often eroded and leave a resistant feature of mountains or hills. They form like a pipe in which the cap is connected to the source of magma by a stem. The Henry Mountains of Utah are one of the typical laccolith sites in
North America. 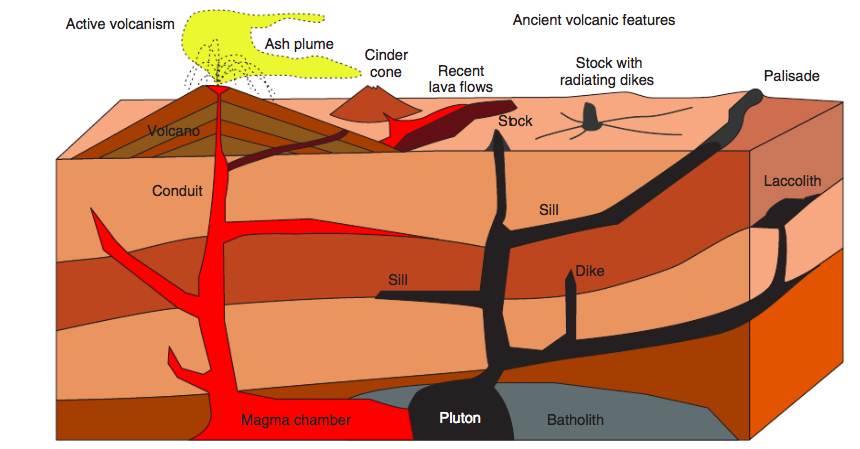 Volcanic Hazards
Volcanoes are some of Earth’s most potent natural hazards and agents of change. They release enormous amounts of energy and material, engaging natural processes that can modify landscapes at a local, regional, and even global scale.
Many volcanic materials and processes pose a threat to human, animal, and other ecological communities.
Volcanoes regularly release volcanic gases that can be dangerous at concentrated levels. Carbon dioxide and fluorine can collect in soil or volcanic ash, causing crop failure, animal death and deformity, and human illness.
Volcanic eruptions can also release massive amounts of sulfur dioxide, which rises into the stratosphere. There, it reflects incoming solar radiation while absorbing outgoing land radiation, leading to a cooling of the Earth’s temperature.
In extreme cases, these “volcanic winters” can cause crop failures and drastically affect weather. The 1815 eruption of Mount Tambora, Indonesia, cooled the average global temperature by as much as 3° Celsius (5.4° Fahrenheit), causing the “year without a summer.”
The enormous energy of volcanic eruptions can cause large landslides that move at speeds of more than 100 kilometers per hour (60 miles per hour). Mount St. Helens, Washington, is a stratovolcano that had an explosive Plinian eruption in 1980. The eruption produced the largest landslide in recorded history, covering a 36-kilometer (14-mile) area of land with ash and rocks. Reaching speeds of 50 to 80 meters (165 to 260 feet) per second, the landslide had enough power to surge over a ridge 400 meters (1,312 feet) high.
Landslides can mix with surrounding rivers, ice, snow, or rain to produce watery mixtures called lahars. This mixture of water, rock, and debris creates a sludge that can obliterate almost anything in its path. The 1985 eruption of Nevado del Ruiz, Colombia, caused small lahars of rock, ash, and melted snow to flow down into the surrounding river valleys. The lahars gained momentum and size as they traveled the riverbeds, ultimately destroying more than 5,000 homes and killing more than 23,000 people.
Explosive eruptions sometimes produce pyroclastic flows, a mixture of hot rock fragments and toxic gases that move almost like a liquid out and away from the volcano. Reaching speeds greater than 80 kilometers per hour (50 miles per hour) and temperatures between 200-700° Celsius (392-1292° Fahrenheit), pyroclastic flows knock down, shatter, bury, or burn anything in their path.
Pyroclastic flows are responsible for the haunting figures from Pompeii and Herculaneum, Italy. While many scientists thought residents of Pompeii suffocated to death from volcanic gases released during Mount Vesuvius’ eruption in 79 CE, new studies suggest that they actually died from extreme heat produced by the volcano’s pyroclastic flow.
Huge plumes of volcanic ash can spread over large areas of the sky, turning daylight into complete darkness and inhibiting air traffic. (During the eruption of Iceland’s Eyjafjallajökull in 2011, flights to and from northern Europe were suspended for more than a week.) Volcanic ash conducts electricity when wet and can contain concentrated levels of toxic materials, posing threats to humans that come in close contact with it on land.
The 1994 double eruption of Vulcan and Tavurvur in Papua New Guinea covered the nearby city of Rabaul in a layer of ash up to 75 centimeters (about 2 feet) deep. Rains turned the ash into a cement-like substance that was heavy enough to collapse 80% of the buildings in the city.