Why in News?: High Vitamin D levels reduce the risk of coronavirus infection, and administration of the vitamin in the infected patients considerably reduce mortality.This was found in a study done by the doctors of Nizams Institute of Medical Sciences (NIMS) on the COVID-affected patients of Gandhi Hospital, Secunderabad. 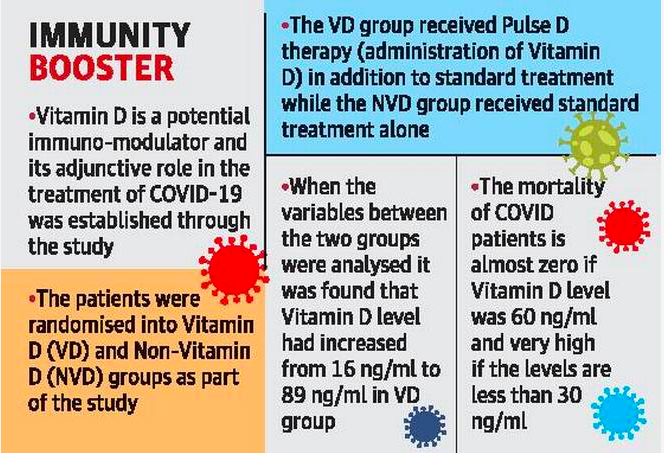 In the tropical and subtropical regions of the world, enough vitami D is made in the skin to meet the body’s needs (unless people are housebound or completely covered). Since cholecalciferol is formed in one organ of the body (the skin) and transported by the blood to act on other organs (the bones, gut, kidneys) it can be called a hormone.

But when people live in high latitudes, are covered with clothes, spend nearly all their time indoors and the sky is polluted with smoke there is insufﬁcient UV exposure in the winter to make enough vitamin D in the skin. Dietary intake is required, so that the cholecalciferol present in a few foods and the ergocalciferol in fortiﬁed foods assume the role of a vitamin.

Inside the body, vitamin itself is not active until it has been chemically modiﬁed (hydroxylated) twice.  Vitamin D, whether of cutaneous origin or absorbed (D3 or D2), is carried in the plasma on a speciﬁc α2-globulin, vitamin D-binding protein. In liver microsomes, the end of the side chain is hydroxylated to form 25(OH)vitamin D. This compound has a more stable concentration in the blood than that of vitamin D which rises temporarily as some is absorbed or synthesized in the skin.

Rickets only occurs in young people, whose bones are still growing. Osteomalacia is the corresponding decalcifying bone disease in adults, whose epiphyses have fused so that the bones are no longer growing. Rickets and osteomalacia can also occur in the tropics in children and women usually staying indoors and fully covered when outdoors. In chronic kidney failure, 1α-hydroxylation is impaired. Renal osteomalacia does not respond to vitamin D (or sunlight), only to 1, 25(OH)2D (pharmaceutical name ‘calcitriol’) or to 1α(OH)D (pharmaceutical name ‘alphacalcidol’).

Fish liver oils (e.g. cod and halibut) and some ﬁsh and marine animal’s livers are rich sources. Moderate sources are fatty ﬁsh (sardine, tuna, salmon, etc.),margarines(which in most countries are fortiﬁed with vitamin D), infant milk formulas, eggs and beef or lamb liver. Milk is fortiﬁed with vitamin  in North America and Scandinavia.

The US Institute of Medicine estimates ‘adequate intakes’ (AI) of vitamin  for those with no sun-mediated synthesis in the skin. For ages 0–50 years (including pregnancy and lactation) the AI is 5µg/day, for 51–70 years 10µg/day and over 70 years of age 15µg/day. Older people make less vitamin  in their skin and also tend to avoid sun exposure and use UV light blocking sunscreen.

Exposure of the skin to sunlight if excessive causes sunburn and brings up the plasma 25(OH)D if it was low but does not lead to vitamin toxicity because with excessive UVlight,previtaminD3 (7-dehydrocholesterol) is converted to biologically inert products

Vitamin D3 is also photodegraded if it is not taken inside the body by vitamin D-binding protein. Vitamin  is one of the vitamins that should not be sold over the counter. Overdosage causes raised plasma calcium (hypercalcaemia),with thirst, anorexia, raised plasma levels of 25(OH) D,and risk of calciﬁcation of soft tissues and of urinary calcium stones. Infants are most at risk of hypervitaminosis D; some children have developed hypercalcaemia on intakes of only 50µg/day (ﬁve times the recommended nutrient intake).