Over the last few days, Taliban forces have swept across Afghanistan, finally capturing the capital city of Kabul on Sunday.As scenes emerge of civilians desperately trying to leave Afghanistan, many will likely seek refuge in neighbouring Tajikistan. Already, reports indicate that approximately 1,600 Afghan soldiers have fled to Tajikistan in the last week

The 1200-km border is also home to the junction between the Hindu Kush and Karakoram Mountains, and is characterised by its rocky, inhospitable terrain.

Tajikistan is a country in Central Asia surrounded by Afghanistan, China, Kyrgyzstan and Uzbekistan.

For a long time, Tajikistan was considered to be under the influence of the Persians, and many ethnic Tajiks residing in Afghanistan retain similar cultural values.

Today, Tajikistan, a small landlocked Central Asian nation, has a predominantly Muslim population and is largely considered to be undemocratic, volatile, and economically unstable. 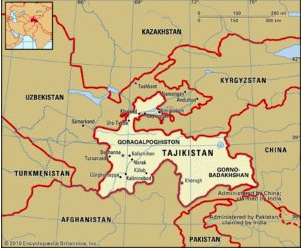 First, It will have to consider the sentiments of Afghan-Tajiks, some who have been welcomed in the Taliban’s ranks but the majority of whom passionately reject the group. Afghan-Tajiks form the second largest ethnic group in the country, second only to the Pashtuns. They dominate Afghanistan’s northern Panjshir valley.

Second, Dushanbe will be cognisant of the rise in extremism caused by the dominance of the Taliban, and the impact it will have on radical factions within Tajikistan who aim to establish an Emirate of their own.

Thirdly, Tajikistan will have to find ways to police its porous border with Afghanistan in order to prevent illicit drugs and refugees from overflowing into the country.

Fourthly,Tajiks also make up a large percentage of the population of Kabul, where they have been politically significant and economically successful. Tajiks are said to maintain strong ties with their families and ethnic kin, making the fate and treatment of Afghan-Tajiks extremely important to their neighbours in the north.

Compounding the problem, Central Asian Nations will also be apprehensive of the spread of Taliban ideology. Tajikistan for one, is a secular state, and will likely fear the morale boost that the Taliban could provide to radical Islamists within Central Asia. Additionally, significant quantities of illegal opium passes from Afghanistan to Europe through Tajikistan. The country already has a considerably high rate of drug abuse and will view the Taliban, who derive most of their funding from opium, as exacerbating that problem.