For more than ten days, fires have been raging in the Simlipal forests. A total of 399 fire points have been identified in the fringe areas bordering the forest, close to the villages, Maloth Mohan.

Conservationists working in Similipal said that several orchids and medicinal plants may have been burnt by the fire.

Similipal National Park is a national park and a tiger reserve in the Mayurbhanj district in the Indian state of Odisha.This protected area is part of the UNESCO World Network of Biosphere Reserves since 2009.Its name is derived from ‘Simul’ (silk cotton) tree.

Located in northeast India, the Similipal Biosphere Reserve lies within two biogeographical regions: the Mahanadian east coastal region of the Oriental realm and the Chhotanagpur biotic province of the Deccan peninsular zone.

The biosphere reserve has the largest zone of Sal in all of India. In addition, the tropical monsoon climate provides ideal circumstances for the development of a distinctive biodiversity, highlighted by 1,076 species of vascular plants. Among them are 93 species of orchids, 300 species of medicinal plants and 52 species of endangered flora

The forest area remains vulnerable to forest fires during Autumn. It is a recurrent annual phenomenon, however, are also brought under control due to the short span of precipitation. The months of January and February witness rainfall of 10.8 and 21 mm, respectively. The last incident of a major forest fire was reported in 2015.

Causes of Fire in Simlipal:

Natural factors such as lighting or even soaring temperatures can lead to fires. Man-made factors are also responsible to a great extent – Instances of poaching and hunting wherein the poachers set a small patch of forest on fire to divert the wild animals can lead to such fires.

Jungle areas are also set on fire by villagers to clear the dry leaves on the ground for easy collection of mahua flowers. Locals use these flowers to make a drink that is addictive in nature.

This year, along with man-made factors, an advanced heatwave with the early onset of summer further deteriorated the condition.

Biosphere reserves include terrestrial, marine and coastal ecosystems. Each site promotes solutions reconciling the conservation of biodiversity with its sustainable use.

Biosphere reserves are nominated by national governments and remain under the sovereign jurisdiction of the states where they are located. Biosphere Reserves are designated under the intergovernmental MAB Programme by the Director-General of UNESCO following the decisions of the MAB International Coordinating Council (MAB ICC). Their status is internationally recognized. 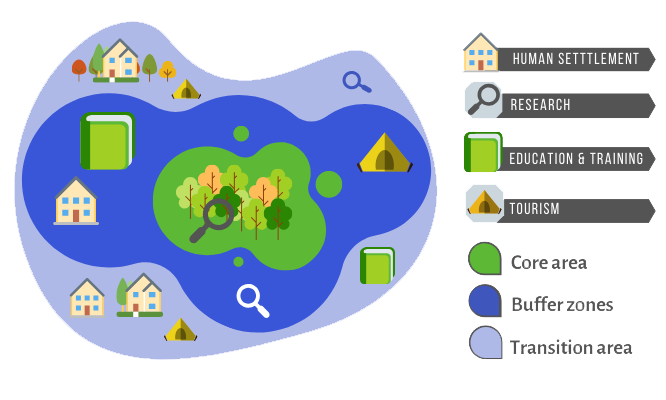 It comprises a strictly protected zone that contributes to the conservation of landscapes, ecosystems, species and genetic variation

It surrounds or adjoins the core area(s), and is used for activities compatible with sound ecological practices that can reinforce scientific research, monitoring, training and education.

The transition area is where communities foster socio-culturally and ecologically sustainable economic and human activities.

Criteria for Designation of Biosphere Reserve

There are total 11 biosphere reserves of India which have been recognized internationally under Man and Biosphere Reserve program: