The Delhi High Court has set up a special committee to find a time-bound solution on ways to provide treatment and therapy options to patients suffering from rare diseases.

The High Court’s direction came while hearing a bunch of petitions filed by patients suffering from rare diseases such as Duchenne Muscular Dystrophy (DMD) and Hunter’s syndromes seeking direction to the government to provide them uninterrupted free treatment in view of the exorbitant cost of treatment.

What are Rare Diseases?

The World Health Organization (WHO) defines rare disease as a disease or condition with a prevalence of less than or equal to 1 in 1000 population. A disease can be rare in a region but may be very common in another region, for example, IgA nephropathy is common in Asia and Africa, but rare in the European Union.

Although rare diseases affect few people but are known to exert a significant impact on the overall public health. Moreover, rare diseases are indeed not so rare, especially in countries with a high population as the prevalence rate is high.

– Around 80% of cases of rare diseases have a genetic origin.

– About 50-70% of patients suffering from rare diseases are children.

– Around 30% of patients with rare diseases die before the age of five.

– Although there are 7000 – 8000 rare diseases identified, not more than 300 treatment options are currently available. About 95% of rare diseases have no approved treatment

Rare diseases are called so because they occur in only a small portion of a country’s population. While we do not have a final count of the number of people with rare diseases in India, government estimates suggest that as many as seven crores (70 million) to 9.6 crores (96 million) are rare individuals.

Rare diseases are mostly genetic, which means that they are passed from parents to children. The parents may or may not exhibit disease symptoms, or other family members may not be patients either. Yet the child or adult can, in fact, be the first patient in the family. With no family history, rare disease diagnosis is thus challenging. Most families only get to know about a rare disease when their loved one is diagnosed correctly. 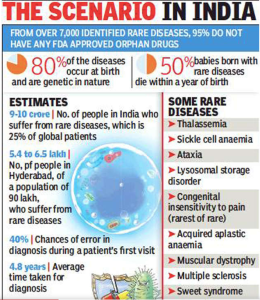 According to a 2017 study published in the Indian Journal of Pharmacology, approximately 450 rare diseases have been identified in India. Moreover, as per the 2011 national population census data, it is estimated that the rare disease and disorder population in the country was 72,611,605.

Hemophilia: Also known as the “Royal disease”, it is a rare genetic disorder in which the blood fails to clot due to the lack of blood clotting factors.

Thalassemia: It is a blood disorder in which the body produces abnormal hemoglobin which in turn destroys the red blood cells leading to anemia. It is a genetic disorder.

Sickle-cell Anaemia: An inherited disease, sickle cell anemia causes the red blood cells to become rigid and sticky and shaped like sickles which affect the oxygen-carrying capacity and thus, anemia.

Auto-immune diseases: It comprises of a broad-spectrum of diseases in which the immune cells attack the healthy cells. Some of the common autoimmune diseases are lupus, multiple sclerosis, Sjogren’s disease, celiac disease, etc.

Gaucher’s disease: It is a genetic condition which is resulted due to a deficiency of an enzyme that breaks down fat thus affecting the metabolism of fats and causing accumulation of fats in the cells and organs.

Hemangiomas: These are noncancerous growths that are made up of blood vessels. It can occur throughout the body and in rare cases can become cancerous. It is usually seen in infants.

Problems for Patients in India:

1.Misdiagnosis:Genetics are hardly taught in India’s undergraduate medical curriculum, and practising doctors have already highlighted why this is a problem (read here). Future doctors may see a patient and not be able to recognise symptoms as that of a rare disease. This increases the chances of misdiagnosis.

2.Costly Treatment:When the diagnosis is correct, the illness can also turn out to be complex. In other words, multiple organs may be impacted. This needs the involvement of other specialist doctors and well-functioning big hospitals. But specialist doctors are mostly available in cities and not rural areas. So a rural family is likely to travel to the city for diagnosis and stay there till that is done, which is in itself a costly affair.

3These diseases are incurable, but treatments exist for some illnesses. These are, however, expensive and unaffordable for the majority of Indians. This is why families have resorted to filing court cases for government funding, after which courts have asked the government to foot the bill.

4.Most rare diseases though do not have targeted treatment options, they can at best be managed through supplementary medicines and other care options such as physiotherapy. These become important in slowing down disease progression (and ultimately help delay severe disability).

The parents of a 5-month-old baby girl from Mumbai managed to crowdsource ₹16 crores for specialised therapy last month. This made national headlines. The baby has Spinal Muscular Atrophy- one of the 8,000 rare diseases documented in humans

A draft National Policy for Rare Diseases has been finalized and placed on the website of the Ministry of Health and Family Welfare with a view to elicit comments / views of the stakeholders, including the States/UTs and the general public by 15-02-2020.

The draft policy provides for lowering the incidence of rare diseases based on an integrated preventive strategy encompassing awareness generation and screening programmes and, within the constraints on resources and competing health care priorities, enable access to affordable health care to patients of rare diseases which are amenable to one-time treatment.

The draft policy has noted that number of persons suffering from diseases considered rare globally, is lacking in India and accordingly provides that for the purpose of the policy the term rare diseases shall construe three goup of disorders identified and categorised by experts based on their clinical experience. Considering the limited data available on rare diseases, and in the light of competing health priorities, the focus of the dradt policy is on prevention of rare diseases as a priority for all the three groups of rare diseases identified by experts.

Group 2: Diseases requiring long term / lifelong treatment having relatively lower cost of treatment and benefit has been documented in literature and annual or more frequent surveillance is required:

Group 3:  Diseases for which definitive treatment is available but challenges are to make optimal patient selection for benefit, very high cost and lifelong therapy.