One of the reasons being attributed as to why Italy is the worst affected country in terms of mortality by the COVID-19, is it’s ageing population. It becomes important to know the population structure of Italy which can be studied from the Population Pyramid.

OVID-19 disease-Italy is affected so badly because they have an ageing population.The high death rate in Italy has been attributed to the fact that the country has the world’s oldest population after Japan.Most of the death toll from Covid-19 have been individuals who are elderly and with previous health issues.

What is a Population Pyramid?

A Population Pyramid is a graph that shows the age-sex distribution of a given population. It a graphic profile of the population’s residents.A population pyramid, also called an “age-gender-pyramid“, is a graphical illustration that shows the distribution of various age groups in a population (typically that of a country or region of the world), which forms the shape of a pyramid when the population is growing.Males are conventionally shown on the left and females on the right, and they may be measured by raw number or as a percentage of the total population. This tool can be used to visualize and age of a particular population. It is also used in ecology to determine the overall age distribution of a population; an indication of the reproductive capabilities and likelihood of the continuation of a species.

The shape of the population pyramid efficiently communicates considerable information about the age-sex structure of a specific population. A broad-based pyramid indicates that people in the younger age categories make up a relatively large proportion of the population, and a narrow or pointed top indicates that older people make up a relatively small proportion of the population. In the older age groups of many populations, the number of females is much greater than the number of males; this is reflected in the shape of the pyramid, such that the bars on the right side of the central axis (the female side) are longer than those on the left (male) side. The median age of the population would be the age group (bar) represented by the point on the vertical axis that equally divides the area within the pyramid (equal areas within the pyramid fall above and below the age represented by the bar). 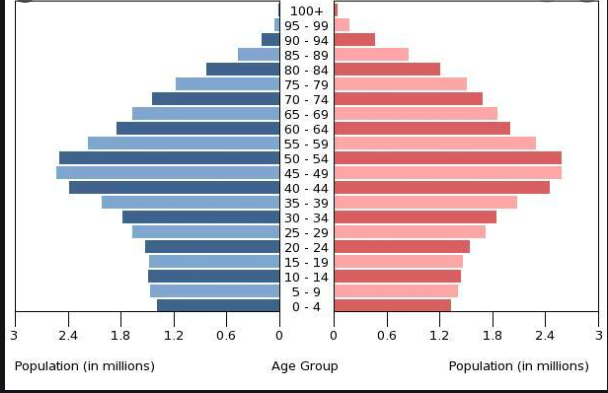 A Total Fertility Rate (TFR) of 2.1 represents the Replacement-Level Fertility: the average number of children per woman needed for each generation to exactly replace itself without needing international immigration. A value below 2.1 will cause the native population to decline

Demographers who have studied the historical changes in age and sex composition, fertility, and mortality of the world’s populations have articulated a theory of demographic transition.

This theory provides a useful approximation of the historical changes that have taken place in populations in many different regions of the world. The stages of this transition are represented by dramatically different population pyramids.

Theory of Demographic Transition is a theory that throws light on changes in birth rate and death rate and consequently on the growth-rate of population.

Along with the economic development, tendencies of birth-rate and death rate are different.

Because of it, growth rate of population is also different.

“Demographic transition refers to a population cycle that begins with a fall in the death rate, continues with a phase of rapid population growth and concludes with a decline in the birth rate”-E.G. Dolan.

According to this theory, economic development has the effect of bringing about a reduction in the death rate.

The relationship between birth and death rates changes with economic development and a country has to pass through different stages of population growth. C.P. Blacker divided population into five types as high, stationary, early expanding, low stationary and diminishing. According to the theory of demographic transition, population growth will have to pass through these different stages during the course of economic development.

The four stages of demographic transition mentioned by Max are explained as follows:

This stage has been called high population growth potential stage. It is characterised by high and fluctuating birth and death rates which will almost neutralize each other. People mostly live in rural areas and their main occupation is agriculture which is in the stage of backwardness. The tertiary sector consisting of transport, commerce banking and insurance is underdeveloped.

All these factors are responsible for low income and poverty of the masses. Social beliefs and customs play an important role in keeping birth rate high. Death rate is also high because of primitive sanitation and absence of medical facilities. People live in dirty and unhealthy surroundings.

As a result, they are disease ridden and the absence of proper medical care results in large deaths. The mortality rate is highest among the poor. Thus, high birth rates and death rates remain approximately equal over time so that a static equilibrium with zero population growth prevails.

It is called the stage of Population Explosion. In this stage the death rate is decreasing while the birth rate remains constant at a high level. Agricultural and industrial productivity increases, means of transport and communication develops. There is great mobility of labour. Education expands. Income also increases. People get more and better quality of food products. Medical and health facilities are expanded.

During the stage economic development is speeded up due to individual and government efforts. Increased use of better technology, mechanization and urbanisation takes place. But there is no substantial change in the men, attitude of the people and hence birth rate stays high i.e., economic development has not yet started affecting the birth rate.

It is also characterised as a population stage because the population continues to grow at a fast rate. In this stage, birth rate as compared to the death rate declines more rapidly. As a result, population grows at a diminishing rate. This stage witnesses a fall in the birth rate while the death rate stays constant because it has already declined to the lowest minimum. Birth rate declines due to the impact of economic development, changed social attitudes and increased facilities for family planning. Population continues to grow fast because death rate stops falling whereas birth rate though declining but remains higher than death rate.

India’s pyramid is bottom heavy i.e. the Indian population has a larger proportion of children, teenagers and young adults compared to China’s.