The US has extended the New Start nuclear arms control treaty with Russia for five years.New Start is the last remaining nuclear arms deal between Russia and the US, and its demise would have ended all limits on deployments of strategic nuclear warheads and delivery systems. 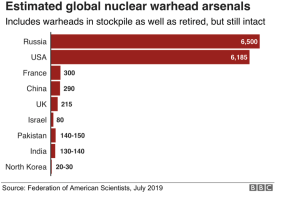 What is New Start Treaty?

New START is a nuclear arms reduction treaty between the United States and the Russian Federation with the formal name of Measures for the Further Reduction and Limitation of Strategic Offensive Arms.

The New Strategic Arms Reduction Treaty, signed in April 2010 by the US and Russia, limits the number of deployed strategic nuclear warheads to 1,550 and deployed missiles and bombers to 700 for each country. The treaty entered into force on February 5, 2011, and would have expired on February 5, 2021.

The US and Russia on Wednesday officially announced a five-year extension of the treaty, the maximum period allowed by the treaty, two days before expiration.

Strategic Offensive Limits: The New START Treaty entered into force on February 5, 2011.  Under the treaty, the United States and the Russian Federation had seven years to meet the treaty’s central limits on strategic offensive arms (by February 5, 2018) and are then obligated to maintain those limits for as long as the treaty remains in force.

Both the United States and the Russian Federation met the central limits of the New START Treaty by February 5, 2018, and have stayed at or below them ever since. Those limits are:

Verification and Transparency: The treaty contains detailed procedures for the implementation and verification of the central limits on strategic offensive arms (discussed above) and all treaty obligations.

Earlier this month, Russia announced that it would follow the US in pulling out of the Open Skies Treaty, which allowed surveillance flights over military facilities to help build trust and transparency between Russia and the west