What is Miyawaki method?

The Miyawaki method, developed by a Japanese botanist after whom it is named, involves planting saplings in small areas, causing them to “fight” for resources and grow nearly 10 times quicker.

Miyawaki method is a method of urban afforestation by turning backyards into mini-forests.

The technique was pioneered by Japanese botanist, Akira Miyawaki, and is believed to ensure 10 times faster plant growth, which results in plantation, that is 30 times denser than usual.

According to experts, this process involves planting dozens of native species in the same area, which becomes maintenance-free after the first three years.

It originated in Japan, and is now increasingly adopted in other parts of the world, including our Chennai. It has revolutionised the concept of urban afforestation by turning backyards into mini-forests.

It includes planting trees as close as possible in the same area which not only saves space, but the planted saplings also support each other in growth and block sunlight reaching the ground, thereby preventing the growth of weed.

Thus the saplings become maintenance-free (self sustainable) after the first three years.

(2), and allows to immediately plant an advanced forest through the choice of the most adapted plant communities

(3). It is called the Potential Natural Vegetation

The rapid afforestation technique has been put to use in Kerala,Punjab,delhi,etc.

The Guru Nanak Sacred Forests, Nanak Bagichi’s,the number of which is now close to 100 in Punjab, are helping in rapid afforestation across the state.

How to grow a forest?

The procedure for developing the sacred forests is simple. 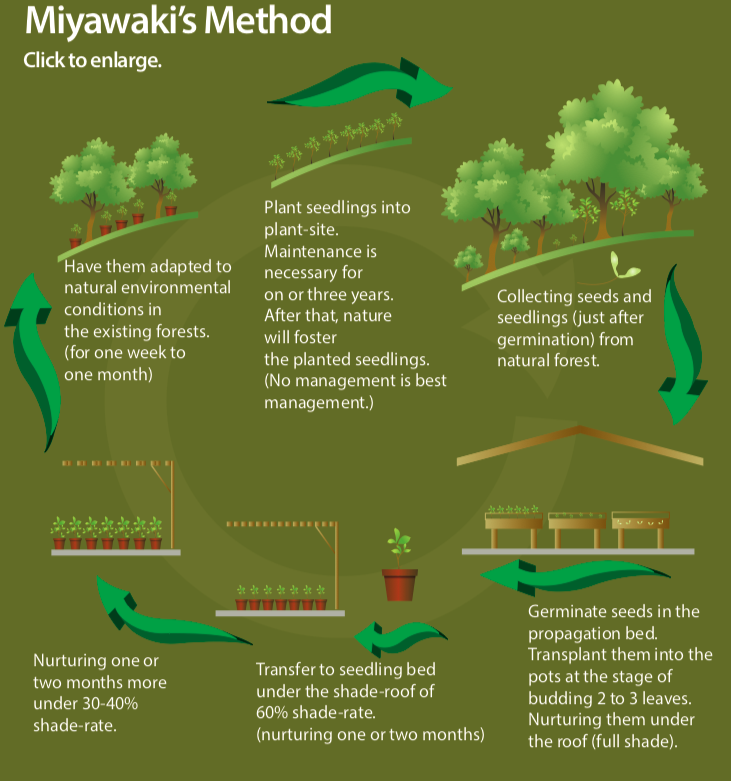 6.these forests serve as a natural bulwark against soil erosion and Tsunami when used along coastlines.

7.The trees grow faster too and are free of chemicals and fertilisers.

These kinds of woods cannot bring in rain. They also do not have the medicinal properties that natural forests have.
They also argue that this method is only successful in smaller spaces or places close to cities. It is not feasible for a tropical country, such as India. Miyawaki forests are extremely dense. It does not allow any movement for possible wildlife. Although these forests do bring back greenery to the congested cities, it is not an alternative to natural forests.