Mauryan rule marks an important phase in our cultural history. Mainly in the period of Ashoka, the art and architecture was at its zenith and fall within the category of court art. Ashoka embraced Buddhism and the immense Buddhist missionary activities that followed encouraged the development of distinct sculptural and architectural styles. 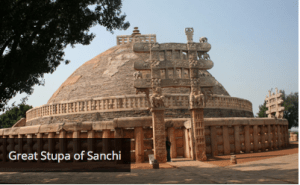 Some of the Prominent Stupas

(b) Indo-Greek (2nd century BCE) Coinage: Menander I Schist and plaster Niches for figured panels or relief-work (Butkara I)

Railings have carvings of Yakshas, Yakshins and other divinities.

It is magnificent (42 meter in diameter and 29 meteres in height).

It was built with white marble and it is known for carvings of garlanded Gods, Bodhi-tree and Dnarmachakra.

The entrance gate depicts four lions on the vedika.

It is located in the Guntur District.

Illustrations- Gods praying to Bodhisattva to take birth on the earth, Buddha’s entry into the womb in the form of a white elephants, birth of the Buddha under a flowering teak tree, etc.

Chir Tope stupa which was excavated by Sir John Marshall, a stupa at Shan-ji-kidheri which was probably entered by Kanishka and a stupa at Jhandial are all located here.

There remains only some pillars which suggest the Jataka stories.