Skip to content
July 13, 2021July 13, 2021
The Kaladan project connects Sittwe Port in Myanmar to the India-Myanmar border.
The project was jointly initiated by India and Myanmar to create a multi-modal platform for cargo shipments from the eastern ports to Myanmar and to the North-eastern parts of the country through Myanmar. 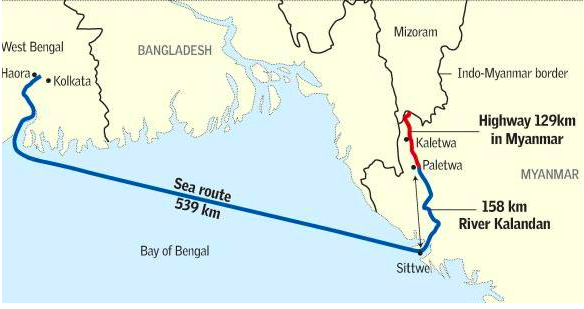 •It is expected to open up sea routes and promote economic development in the North-eastern states, and also add value to the economic, commercial and strategic ties between India and Myanmar.
•This project will reduce distance from Kolkata to Sittwe by approximately 1328 km and will reduce the need to transport good through the narrow Siliguri corridor, also known as Chicken’s Neck.
•Kaladan project seeks to ease India’s access to Southeast Asia
•India has for years sought transit access through Bangladesh to ship goods to the landlocked north-eastern States.
•At present, the only route to this region from the rest of India is a rather circuitous one through a narrow strip of Indian territory nicknamed the Chicken’s Neck in West Bengal, sandwiched between Bhutan and Bangladesh.
• The new route through Sittwe would significantly lower the cost and distance of movement from Kolkata to Mizoram and beyond.

What is the delay?

The $484 million Kaladan project, was originally scheduled to be completed by 2014.