Context: Amid tension with India over constructing of a road till the Lipulekh pass; Nepal is planning to start three armed police border outposts along the India-Nepal border in Uttarakhand.The inauguration of a road from Dharchula to Lipu Lekh (China border) by India’s Defence Minister Rajnath Singh (an event over videoconferencing on May 8) has now been followed by Nepal’s charge claiming that the stretch passes though Nepalese territory.This road follows the traditional pilgrim route for the Kailash-Mansarovar yatra. 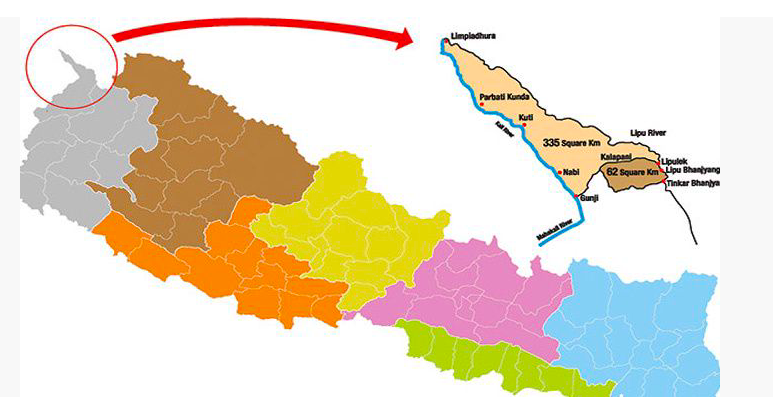 The British before independence used the Lipu Lekh pass for trade with Tibet and China. The Survey of India maps since the 1870s showed the area of Lipu Lekh down to Kalapani as part of British India. Both the Rana rulers of Nepal and the Nepalese Kings accepted the boundary and did not raise any objection with the government of India after India’s Independence.

As a reward for the military help rendered by Jung Bahadur Rana in quelling the 1857 uprising, the areas of Nepalgunj and Kapilvastu were restituted to Nepal soon thereafter. The British did not return any part of Garhwal or Kumaon, including the Kalapani area, to Nepal.

The dispute over the location of the river Kali, and consequently that of the territoriality of Kalapani, was first raised by the Nepalese government only in 1998. Even when Indian military units occupied the Kalapani area during the Sino-Indian war of 1962, Nepal did not raise an objection. “ 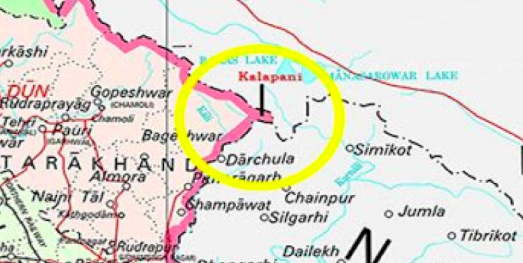 The India–Nepal Border, is an open international border running between India and Nepal. The 1,690 km long border includes the Himalayan territories as well as Indo-Gangetic Plain. The current shape was established after the Sugauly treaty of 1816 between Nepal and the British Raj.

Before the 1816 Treaty of Sugauli, the Nepalese kingdom stretched from the Sutlej river in the west to the Teesta river in the East. Nepal lost the Anglo-Nepalese War and the resulting Treaty limited Nepal to its present territories.

Treaty of Sagauli, (March 4, 1816), agreement between the Gurkha chiefs of Nepal and the British Indian government that ended the Anglo-Nepalese (Gurkha) War (1814–16). By the Sugauli treaty, Nepal renounced all claim to the disputed Tarai, or lowland country, and ceded its conquests west of the Kali River and extending to the Sutlej River. Nepal remained independent, but it received a British resident with the status of an ambassador to an independent country rather than of the controlling agent of the supreme government in an Indian state.

The Sugauli Treaty stated that “the Rajah of Nipal  hereby cedes to the East India Company in perpetuity all the under-mentioned territories”, including “the whole of the lowlands between the Rivers Kali and Rapti.” It elaborated further that “[t]he Rajah of Nipal [Nepal] renounces for himself, his heirs, and successors, all claim to or connection with the countries lying to the west of the River Kali and engages never to have any concern with those countries or the inhabitants there of.”

The bone of contention is the Kalapani-Limpiadhura-Lipulekh trijunction between Nepal-India and China (Tibet). Located on the banks of the river Kali at an altitude of 3600m, the Kalapani territory lies at the eastern border of Uttarakhand in India and Nepal’s Sudurpashchim Pradesh in the West.

India claims the area is part of Uttarakhand’s Pithoragarh district, while Nepal believes it to be part of its Dharchula district.

The present controversy has arisen since the Nepalese contest that the tributary that joins the Mahakali river at Kalapani is not the Kali river. Nepal now contends that the Kali river lies further west to the Lipu Lekh pass.

Lipulekh is a Himalayan pass on the border between India’s Uttarakhand state and the Tibet region of China, near their trijunction with Nepal. Nepal has ongoing claims to the southern side of the pass, called Kalapani territory, which is controlled by India. 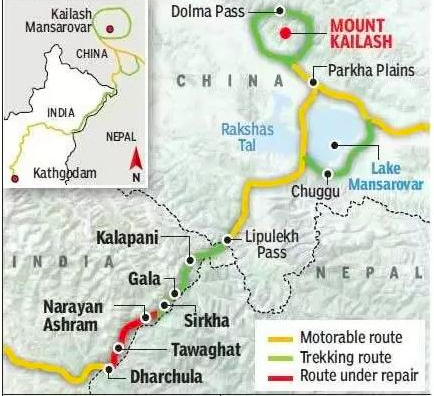 Strategic Importance of Lipulekh and Kalapani

Lipulekh and Kalapani is a tri-juncture of India-Nepal and China. They are of geo-strategic and geo-political importance as India can keep an eye against any attempt of encroachment by China or the movement of the People’s Liberation Army (PLA) towards India.

Similarly, Kalapani has not been free from the politics meted out from the Chinese front as well.

In 2018, during Doklam standoff, Wang Wenli, Deputy Director-General of the Boundary and Ocean Affairs of China’s Ministry of Foreign Affairs remarked, “the Indian side has also many tri-junctions. What if we use the same excuse and enter the Kalapani region between China, India, and Nepal or even into the Kashmir region between India and Pakistan”.

Source:The Hindu and The Indian Express