Sculpture of HarappanCivilisation is considered to be a golden chapter as the beginning of Indian art and sculpture in 3000 B.C. it can be easily deciphered that the people of this civilization were great lovers of the fine arts especially of dancing, painting, and creating sculptures.The Indus Valley art forms included sculptures, seals, pottery, gold jewellery, terracotta figures etc.

In stone, the two most discussed male figures are male torso and the bearded priest. The most discussed example of metal sculpture in context with Indus Valley is the Dancing Girl. Metal casting was popular at all the major centres of the Indus Valley Civilisation, for example the copper dog and bird of Lothal, bull from Kalibangan and the human figures of copper and bronze from Harappa and Mohenjodaro. The terracotta figurines had a universal popularity in the ancient world and Harappan culture was no exception to this. There are plenty of terracotta seals and figurines recovered from Harappan sites which range from toys to cult objects such as mother goddess to birds and animals , including monkeys, dogs, sheep, cattle-both humped and humpless bulls. 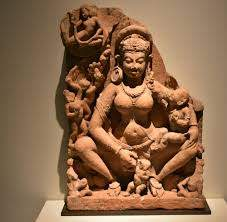 These small objects have been beautifully carved out of stone and then fired to make them more durable. Over 3,500 seals have been found so far. The most typical Indus seal is square, with a set of symbols along the top, an animal in the centre, and one or more symbols at the bottom. Animals found on the seals include rhinoceros, elephants, unicorns and bulls. On the back is a projection, probably to hold while pressing the seal into other materials such as clay. The projections also have a hole for thread, presumably so the seal can be worn or carried as a necklace.

Most of the seals have inscriptions in a pictographics script which is yet to be decpihered. The script was mostly by right to left, but bi- directional writing style i.e. right to left on one line  and left to right to another linehas been found.
The animal impression were also therewhich were carved intaglio on the surface. The common animals motifswere unicorn, humped bull, rhinoceros, tiger, elephant, buffalo, bison, goat, crocodile etc. Some seals had inscriptions on a third side as well.
Seals were primarily used for commercial purpose and helped in communication.  some seals with a hole on them have been found on dead bodies indicating its use as amulets, carried on the person on their owners. Mathematical images also found on some seals, which might have been used for educational purposes as well. Seals with symbol similar to ” Swastika” design have also been found. The Harappan pottery is bright or dark red and uniformly sturdy and well baked. It consists chiefly of wheel made wares both plain and painted. The plain pottery is more common than the painted ware. The plain ware is usually of red clay with or without a fine red slip. The painted pottery is of red and black colours. Several methods were used by people for the decoration of pottery. Geometrical patterns, circles, squares and triangles and figures of animals, birds, snakes or fish are frequent motifs found in Harappan pottery. Another favourite motive was tree pattern. Plants, trees and pipal leaves are found on pottery. A hunting scene showing two antelopes with the hunter is noticed on a pot shreds from the cemetery jar found at Lothal depicts a scene in which two birds are seen perched on a tree each holding a fish in its beak.

The potteries were used for three main purpose: was used for household purposes, mainly storage of grain and water. generally less than half an inch in size, were used for decorative purposes. -with large hole  in the bottom and small hole across the side. They might have been used for straining liquor.

Ornaments were made of gold, silver, copper, ivory, precious and semi-precious stones, bones and shells etc. Other pieces that women frequently wore were thin bands of gold that would be worn on the forehead, earrings, primitive brooches, chokers and gold rings.

Some of the gold items found in the excavation include: The cone-shaped head ornaments constructed from gold were discovered in Harappa.

A gold pendant set was also part of the excavated the jewellery. The experts are not sure about what it was worn with

The experts believe that amongst the excavated pieces, there is an amulet too which might have been used to ward-off the evil. The ornament is candle-shaped and appears to be a neck-ornament.
Most of these jewellery items have been put on exhibit at the Alamkara – the jewellery gallery as well as the Harappa gallery at the National Museum, New Delhi in India. The sculptures and other items from the excavation are also on display here.