The Gupta Dynasty, founded by Chandragupta I (accession c. 320 CE), ruled in North Central India between the 4th and 6th centuries CE and the period is considered a golden age of artistic accomplishment.Gupta architecture is very diverse in style, design and features. This very diversity illustrates that Hindu temple architecture was in its formative stage and was yet to arrrive at the standardised situation of later centuries. Nevertheless, the influence of Gupta-era buildings on later Indian temple architecture is indisputable and continued right through to the Medieval period.

The Guptas were the first architects of purpose-built Hindu (but sometimes also Buddhist) temples which evolved from the earlier tradition of rock-cut shrines. Adorned with towers and elaborate carvings, these temples were often dedicated to all the Hindu gods. Unfortunately, relatively few of the large number of Gupta temples built have survived.

The earliest examples of religious architecture were cave-temples which typically had exteriors decorated with relief sculpture and a single carved doorway. Inside the shrine, ritual sculptures were placed such as a Shiva linga (phallus) and the walls were richly decorated with more carvings showing scenes from mythology.

Notable examples are found at Udayagiri in Madhya Pradesh where one cave bears a date mark of 401 CE. Here in one shrine is one of the finest examples of Gupta art, the celebrated relief showing Vishnu in his incarnation as the boar-headed Varaha

The panel measures 7 x 4 metres and the central figure, carved almost in the round, is emerging from the cosmic waters, having defeated a snake-like monster and rescued the goddess Bhudevi (Earth). The scene, a famous Hindu myth, may also be an allegorical reference to the peace and protection offered by the Gupta kings.

Finally, mention should be made of the Ajanta caves, a row of 29 rock-cut caves following the Waghora river bed ravine in north-west Deccan.

Dating from the 2nd century BCE to 7th century CE, they contain some of the earliest and finest examples of Indian wall-painting.

The subject matter is largely scenes from the life of Buddha. Cave 1 contains a columned shrine in typical Gupta style with flat cushion-topped column capitals. Cave 19 was built in the 5th century CE and has a Gupta-style chaitya (shrine) facade with columned porch and large, almost semi-circular aperture above. The whole facade is covered in rich carvings and relief panels showing scenes from Buddhist lore.

IN GUPTA ARCHITECTURE THE SQUARE WAS CONSIDERED THE MOST PERFECT FORM AND TEMPLES WERE DESIGNED TO BE APPRECIATED FROM ALL SIDES.

The Gupta style was influenced by Kusana, Mathura, and Gandhara and borrowed the common features of T-shaped doorways, decorated door jambs, sculpted panels with high-relief figures, and laurel-wreath and acanthus motifs.

Constructed using sandstone, granite, and brick, Gupta-era temples added to this architectural heritage with horseshoe gavakshas arches and distinctive curved shikharatowers which are frequently topped with a ribbed disk ornamentation known as an amalaka. These elaborate buildings are further decorated with a mass of ornate mouldings and sculptures set in niches. In Gupta architecture, the square was considered the most perfect form and temples were designed to be appreciated from all sides so that each carries decorative architectural features.

Most temples also adopt a square plan with the single cubicle garbhagriha in the centre. This is normally entered by a short columned porch set over a single, highly decorated doorway with a projecting lintel. Columns can support a pot-and-foliage capital, and roofs were generally flat, as in surviving examples at Tigawa and Sanchi in Madhya Pradesh. Other typical Gupta decorative features include triangle motifs inside doorways and lion’s heads at the ends of stone beams. 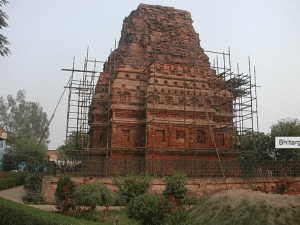 The temple at Bhitargaon in Uttar Pradesh is one of the most complete surviving Gupta temples. It is a rare early example of a Hindu temple constructed entirely of brick, dating to the late 5th century CE. Although damaged in its upper portion, the four-sided and curved shikhara tower of the temple maintains its gavaksha niches and shallow pilasters which diminish in size as the tower rises to a pinnacle. These and the decorated capitals create frames in which were once set terracotta panels.

Few panels survive intact but examples from other sites demonstrate that they would have once shown lively scenes from mythology, in particular figures of river goddesses. Panels still in their original position in the upper tiers of the tower display grotesque faces which remind of the gargoyles of European Gothic cathedrals