A glacial lake outburst flood (GLOF) is being termed as the probable cause for what happened in Chamoli.

Glaciers are made of layers of compressed snow that move or “flow” due to gravity and the softness of ice relative to rock. A glacier’s “tongue” can extend hundreds of kilometers from its high-altitude origins, and the end, or “snout,” can advance or retreat based on snow accumulating or melting.Seismic activity and a buildup of water pressure can cause glaciers to burst, but one particular concern is climate change. High temperatures coupled with less snowfall can accelerate melting, which causes water to rise to potentially dangerous levels.

A glacial lake outburst flood (GLOF) is a release of meltwater from a moraine- or ice-dam glacial lake due to dam failure1,2. GLOFs often result in catastrophic flooding downstream, with major geomorphic and socioeconomic impacts.

When glaciers retreat, they leave a space which becomes a glacial lake being filled with water. When such a lake breaches, it is known as glacial lake outburst flood. It is yet to be investigated what triggered the breach in Chamoli — whether there was an avalanche in the area recently or whether the lake breach was the result of construction, anthropological activities, climate change etc.

Retreating glaciers, like several in the Himalayas, usually result in the formation of lakes at their tips, called proglacial lakes, often bound only by sediments and boulders. If the boundaries of these lakes are breached, it can lead to large amounts of water rushing down to nearby streams and rivers, gathering momentum on the way by picking up sediments, rocks and other material, and resulting in flooding downstream.

But while GLOF is being considered to be the most likely trigger for Sunday’s event, there are questions surrounding this possibility. We don’t know of any big glacial lakes in this region.

What is an avalanche?

An avalanche is falling masses of snow and ice which gathers pace as it comes down the slope. But an avalanche is unlikely to result in the rise of water of that magnitude what Chamoli witnessed.

What happened in Uttarakhand in 2013 was a multi-day cloudburst. It is a sudden, very heavy rainfall accompanies by a thunderstorm. But it generally happens in monsoon.

In fact, the season in which such a disaster was witnessed has surprised experts as there is no immediate trigger that can be pointed to as the reason why water level rose to that level washing away two hydro projects.

About the Tributaries Involved: 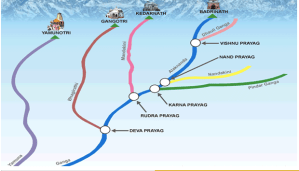