Genes, which are carried on chromosomes, are the basic physical and functional units of heredity. Genes are specific sequences of bases that encode instructions on how to make proteins. Although genes get a lot of attention, it is the proteins most life functions and even make up the majority of cellular structures.When genes are altered so that the encoded proteins are unable to carry out their normal functions, genetic disorders can result. Gene therapy is a technique for correcting defective genes responsible for disease development. Researchers may use one of several approaches for correcting faulty genes: 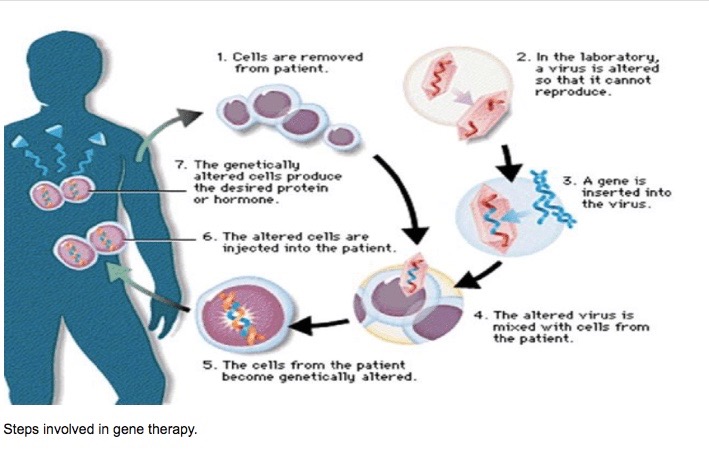 In most gene therapy studies, a ‘normal’ gene is inserted into the genome to replace an ‘abnormal’, disease causing gene.

A carrier molecule called vector must be used to deliver the therapeutic gene to the patient’s target cells.

Currently, the most common vector is a virus that has been genetically altered to carry normal human DNA. Viruses have evolved a way of encapsulating and delivering their genes to human cells in a pathogenic manner.

Scientists have tried to take advantage of this capability and manipulate the virus genome to remove disease causing genes and insert therapeutic genes.

Target cells, such as the patient’s liver or lung cells are infected with the viral vector.

Besides virus-mediated gene-delivery systems, there are several non-viral options for gene delivery.

The simplest method is the direct introduction of therapeutic DNA into target cells. This approach is limited in its application because it can be used only within tissues and requires large amounts of DNA.

There are several techniques for carrying out gene therapy. These include:

There are two different types of gene therapy depending on which types of cells are treated:

What are Stem Cells?

What is DNA Fingerprinting?