On 7 April, the US Navy’s 7th Fleet issued a release to say one of its warships, guided missile destroyer USS John Paul Jones, had asserted navigational rights and freedoms around 130 nautical miles west of Lakshadweep. This is inside an area India considers its exclusive economic zone (EEZ).

An exclusive economic zone (EEZ), as prescribed by the 1982 United Nations Convention on the Law of the Sea, is an area of the sea in which a sovereign state has special rights regarding the exploration and use of marine resources, including energy production from water and wind. 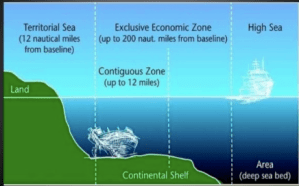 While many have been recognized by the concerned countries, a few are being disputed. In some cases, disputed boundaries led to large areas of disputed EEZ, notably the Spratly Islands on the South China Sea, portions being contested by China, Vietnam, Malaysia and the Philippines.

In the EEZ, the coastal state has the rights to:

What lies at the core of the problem in the recent Incident?

Differing interpretations of the UN Convention on the Law of the Sea (UNCLOS) is the problem. India believes the convention does not authorize states to carry out military exercises in the EEZ without the consent of the coastal state, especially if vessels are carrying arms. Analysts say UNCLOS allows innocent passage even through territorial waters.

Territorial sea, as defined by the 1982 United Nations Convention on the Law of the Sea, is a belt of coastal waters extending at most 12 nautical miles (22 km; 14 mi) from the baseline (usually the mean low-water mark) of a coastal state.:

The difference between territorial sea and the EEZ is that the former confers full sovereignty over the waters, whereas the latter is merely a “sovereign right” which refers to the coastal nation’s rights below the surface of the sea. The surface waters are international waters.

The term territorial waters is sometimes used informally to refer to any area of water over which a state has jurisdiction, including internal waters, the territorial sea, the contiguous zone, the exclusive economic zone and potentially the continental shelf.