El Niño is a climate pattern that describes the unusual warming of surface waters in the eastern tropical Pacific Ocean. El Nino is the “warm phase” of a larger phenomenon called the El Nino-Southern Oscillation (ENSO). 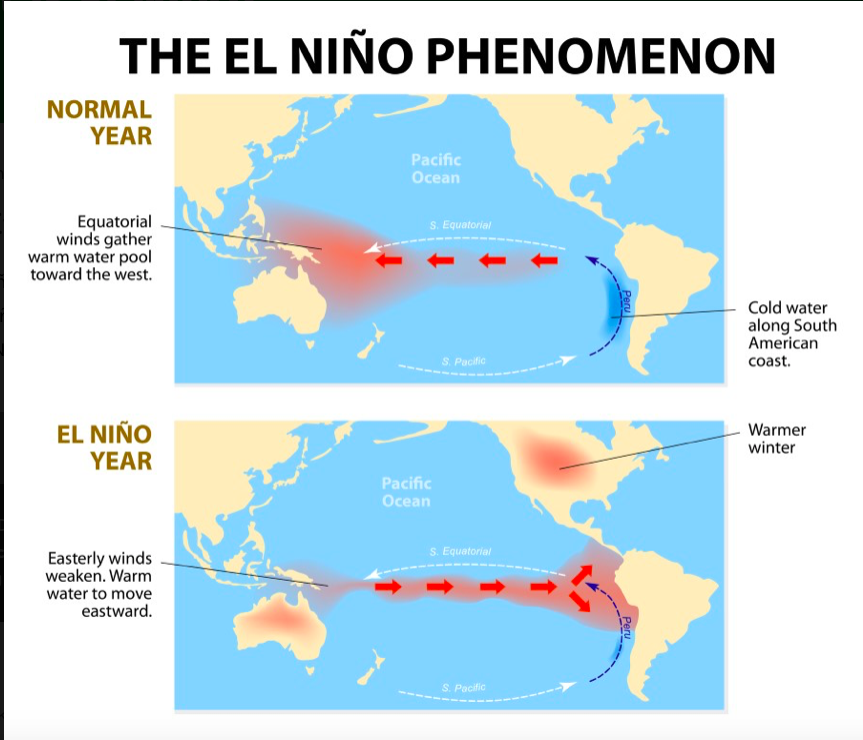 El Nino has an impact on ocean temperatures, the speed and strength of ocean currents, the health of coastal fisheries, and local weather from Australia to South America and beyond. El Nino events occur irregularly at two- to seven-year intervals. However, El Nino is not a regular cycle, or predictable in the sense that ocean tides are.

El Nino was recognized by fishers off the coast of Peru as the appearance of unusually warm water. We have no real record of what indigenous Peruvians called the phenomenon, but Spanish immigrants called it El Nino, meaning “the little boy” in Spanish. When capitalized, El Nino means the Christ Child, and was used because the phenomenon often arrived around Christmas

What is Upwelling?
In order to understand the development of El Niño, it’s important to be familiar with non-El Niño conditions in the Pacific Ocean. Normally, strong trade winds blow westward across the tropical Pacific, the region of the Pacific Ocean located between the Tropic of Cancer and the Tropic of Capricorn. These winds push warm surface water towards the western Pacific, where it borders Asia and Australia.
Due to the warm trade winds, the sea surface is normally about .5 meter (1.5 feet) higher and 45° F warmer in Indonesia than Ecuador. The westward movement of warmer waters causes cooler waters to rise up towards the surface on the coasts of Ecuador, Peru, and Chile. This process is known as upwelling.
Consequences of Upwelling:
Heat Dome Effect: