DNA fingerprinting is a method used to identify living things based on samples of their DNA. Instead of looking at the whole sequence of a person’s DNA, these techniques look at the presence or absence of common markers that can be quickly and easily identified.

The technique was developed in 1984 by British geneticist Alec Jeffreys, after he noticed that certain sequences of highly variable DNA (known as minisatellites), which do not contribute to the functions of genes, are repeated within genes. Jeffreys recognized that each individual has a unique pattern of minisatellites (the only exceptions being multiple individuals from a single zygote, such as identical twins).

The process is sometimes called “DNA testing” or “DNA profiling”, but signals the same process. Early DNA fingerprinting was developed in the years before the whole human genome had been sequenced. DNA fingerprinting typically relies on short tandem repeats (STRs), which are unique to individuals. These sections of DNA can be compared between two different samples. If they show the same pattern after gel electrophoresis, it indicates that the samples are from the same source.

A DNA fingerprint looks something like the columns on the paper below. On this paper, each dark band represents a fragment of VNTRs – and each column is a different tissue sample. A match would be indicated by two columns whose VNTRs patterns matched precisely. 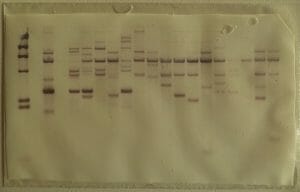 DNA profiling is different from genetic testing, in which a DNA sample is tested to see if it contains genes for inherited diseases or other traits.

Digesting the DNA with the help of restriction endonuclease enzymes.

Separating the digested fragments as per the fragment size by the process of electrophoresis.

Blotting the separated fragments onto synthetic membranes like nylon.

DNA of every person is 99.9% identical but there is a 0.1% differences among individuals. The DNA sequence is just like fingerprinting. There are so many bases which are time-consuming but now scientist introduced some techniques which quicken the identification process. This (DNA fingerprinting) technique is like a bar-code of an individual’s DNA.

Like nearly everything else in the scientific world, nothing about DNA fingerprinting is 100 assured. The term DNA fingerprint is, in one sense, a misnomer: it implies that, like a fingerprint, the UNTR pattern for a given person is utterly and completely unique to that person. Actually, all that a VNTR pattern can do is present a probability that the person in question is indeed the person to whom the VNTR pattern (of the child, the criminal evidence or whatever else) belongs.

What are Stem Cells?