Dhubri-Phulbari Bridge is a proposed bridge over the Brahmaputra river between Assam and Meghalaya in North-East India.

The 55 km-long road from Serampore in West Bengal to Dhubri, Assam will be constructed, beginning October this year. 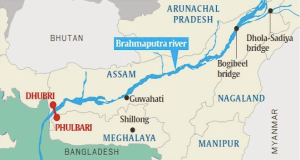 A two-lane Bridge on the Brahmaputra between Majuli (North Bank) and Jorhat (South Bank).

The bridge will be located on NH-715K and will connect Neematighat (on Jorhat side) and Kamalabari (on Majuli side). The Construction of the bridge has been a long demand of the people of Majuli who for generations have been dependent on the ferry services to connect with the mainland of Assam.