Harappan city of Dholavira in Kutch was declared to be a  UNESCO world heritage site.The decision taken at the 44th session of the UNESCO World Heritage Committee on at Fuzhou, China, comes days after the Kakatiya Rudreshwara temple in Telangana, popularly called the Ramappa Temple, was inscribed on the list.It is the first site of Indus Valley Civilisation in India to be included on the coveted list.

Budget 2020 by Finance Minister Nirmala Sitharaman also placed unprecedented importance on cultural development and To facilitate tourism and cultural development, one of the policies announced was to turn five archaeological sites – Rakhigarhi, Hastinapur, Sivasagar, Dholavira, and Adichanallur –into premier destinations with on-site museums.

After Champaner, Rani ki Vav and the walled city area of Ahm-edabad, Dholavira is the fourth site from Gujarat to gain the tag.

Dholavira is an archaeological site at Khadir bet in Bhachau Taluka of Kachchh District, in the state of Gujarat in western India, which has taken its name from a modern-day village 1 kilometre (0.62 mi) south of it. This village is 165 km (103 mi) from Radhanpur. Also known locally as Kotada timba, the site contains ruins of an ancient Indus Valley Civilization/Harappan city.

Dholavira’s location is on the Tropic of Cancer. It is one of the five largest Harappan sites and most prominent archaeological sites in India belonging to the Indus Valley Civilization.It is also considered as having been the grandest of cities of its time.

It is located on Khadir bet island in the Kachchh Desert Wildlife Sanctuary in the Great Rann of Kachchh.

Dholavira is the larger of the two most remarkable excavations of the Indus Valley Civilization or Harappan culture, dating back to 4500 years ago. While the other site, Lothal, is more exhaustively educated and easier to reach, a visit to Lothal only complements, rather than replaces, a visit to Dholavira.

It is known for one of the world’s earliest and best planned water conservation systems and what might be the world’s first signboards, written in ancient Indus script.

After the peak of the civilization Dholavira was temporarily abandoned, after which it seems that the settlers returned with a markedly de-urbanized culture. 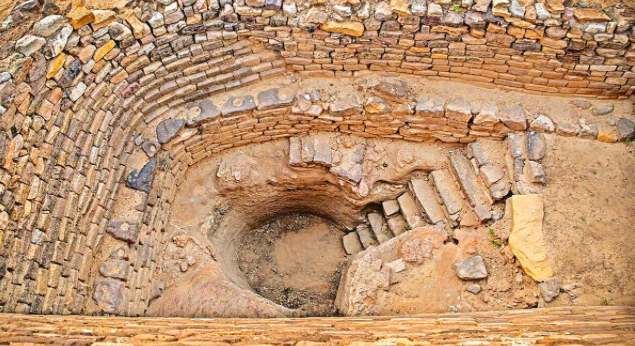 Dholavira, known locally as Kotada (which means large fort), sprawls over 100 hectares of semi-arid land at the north-west corner of the island of Khadir, one of the islands in the Great Rann of Kutch that remain above the flood-plains in months when the rest of the desert is submerged by the monsoon.

Dholavira has two seasonal nallahs, or streams: Mansar in the north, and Manhar in the south.

The site was unearthed by the Archeological Survey of India (ASI) in 1967, but has been systematically excavated only since 1990. The excavations of Dholavira came into full swing in 1989 when R.S. Bisht, an expert archaeologist from the Archaeological Survey of India, and his team conducted a series of excavations at the site between 1990 and 2005.

Also found were 10 large stone inscriptions, carved in Indus Valley script, perhaps the world’s earliest signboard. These are among the most important discoveries about the Indus Valley Civilization, but remain tantalizingly undeciphered.

The remains show an imposing citadel in the center, with a middle and lower town, each fortified separately, built with pleasingly smoothed structures of sun-dried brick and stone masonry, and with remarkable town planning. Well laid out lanes lead outward systematically from the citadel, with a well-constructed underground drainage system for sanitation. There is a large stadium with a complex structure and seating arrangement. 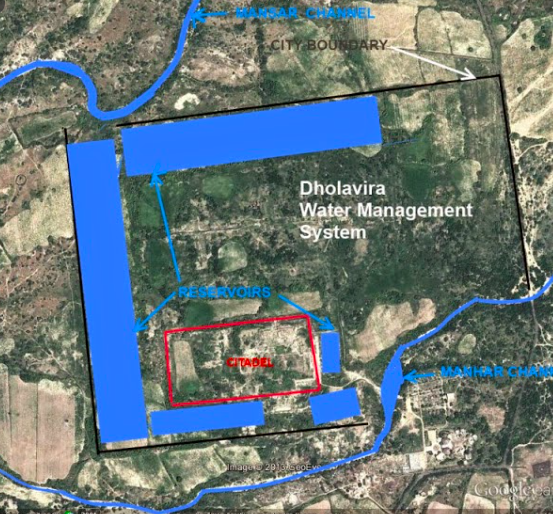 One of unique features of Dholavira is that, unlike other Harappan cities like Harappa and Mohenjo-daro, the city is built almost exclusively of stones instead of bricks.

Another striking feature of the ancient city was its sustainable use of water resources. The wisely planned and constructed network of reservoirs and water channels allowing the successful harvest of rainwater and diversion of rivulets, exemplifies the ingenuity of the Harappan people inhabiting the city. The ability to conserve every drop of water in the parched landscape speaks volumes about the engineering skills of the people of Dholavira. For all these reasons and more, the level of sophistication achieved by the people of Dholavira amazes the modern world to this date. Dholavira has one of the world’s earliest water conservation systems ever excavated. Satellite pictures show a reservoir underground, an expertly constructed rainwater harvesting system extending from the walls of the city, without which the settlement would not have thrived in the sparse rainfall of the desert.

Dholavira is one of the two largest Harappan sites in India, and 5th largest in the subcontinent. Like Lothal, it passed through all the stages of the Harappan culture from circa 2900 BC to 1500 BC, while most others saw only the early or late stages.

The excavation found a decline of the civilization in the 5th of 7th stages, after which were signs of a temporary desertion of the site. Settlers returned later in the late Harappan stage, with a change in their pottery, influenced by cultures found at sites in Sindh, South Rajasthan and other parts of Gujurat, but they did not bring the return of the civilization. Their houses, for example, were built in an entirely new form that was circular (bhungas), and the material signs were strikingly deurbanized and simplified. Perhaps the last stage of the powerful civilization had become aware of its future, and was preparing itself for a gradual end. 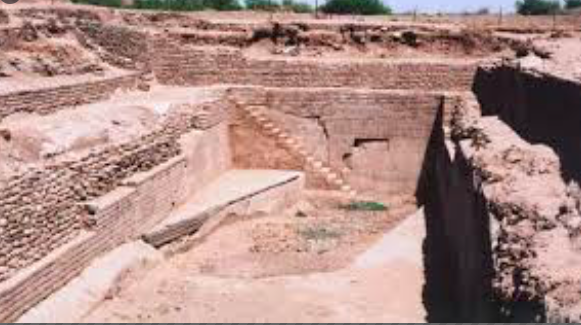 A World Heritage Site is a location with an “outstanding universal value”. This signifies “cultural and/or natural significance which is so exceptional as to transcend national boundaries and to be of common importance for present and future generations of all humanity”. To be included, sites must meet at least one of the ten selection criteria, such as representing a masterpiece of human creative genius, or exhibiting an important interchange of human values over a span of time or within a cultural area of the world.