‘Coupled Lithosphere-Atmosphere- Ionosphere-Magnetosphere System (CLAIMs)’ is an interdisciplinary program of Indian Institute of Geomagnetism funded by DST  with the research focused on energy transfer to the atmosphere during solid Earth processes such as earthquakes as well as tsunamis. 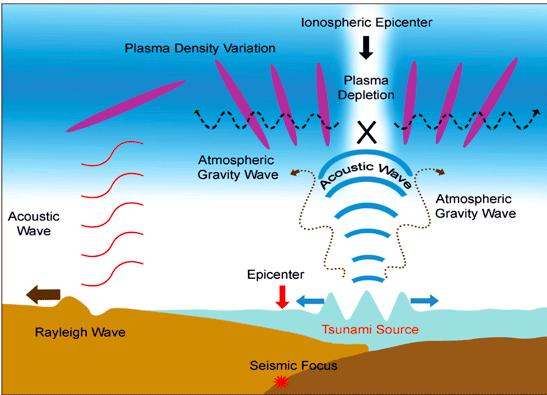 Earthquake triggers when inter-seismic accumulation strain results in a level of stress that can no longer be supported by friction on the inter-plate boundary or intra-pate fault. Hence monitoring of plate motion and study of active tectonics, seismic activity and seismic hazard evaluations have become primarily concern and a major research areas since the plate tectonic hypothesis.

During earlier stage, palaeomagnetism and seismological data provided the information of spreading anomalies and demarcation of the plate boundaries respectively.  However, after the advent of space geodetic techniques the quality and quantity of the space measurements dramatically increased the ability to monitor the plate motion to understand the active tectonic or seismic processes at all scales over the past two decades. Further Global Navigation Satellite System (GNSS) (sine 1980s) and Synthetic Aperture Radar Interferometry (InSAR) (since 1992s)   GNSS and InSAR have led to a revolution in lithospheric deformation studies with its ability to measure the station positions in few millimeter level accuracy and highly precise surface deformation measurements from remote sensing data respectively.

The scientists  successfully associated the observed ionospheric disturbances during a seismic event exclusively to the event by studying the ionospheric variation during the Indian Ocean doublet earthquake on 11 April 2012, a largest ever recorded  (Mw. 8.6) that followed by a powerful aftershock of Mw 8.2, the highest ever recorded aftershock. These two earthquakes occurred in the same geographic region (epicentres apart by ~176 km) within a time delay of ~2 hours.

Analysing the ionospheric perturbations during another Nepal earthquake which occurred on 12 May 2015 (Mw 7.3), the researcher further demonstrated that.