In a report titled “Glaciers of the Himalayas, Climate Change, Black Carbon and Regional Resilience”, the World Bank said that the  Black carbon (BC) deposits produced by human activity which accelerate the pace of glacier and snow melt in the Himalayan region can be sharply reduced through new, currently feasible policies by an additional 50% from current levels.

The research report from the WB covers the Himalaya, Karakoram and Hindu Kush (HKHK) mountain ranges, where, it says, glaciers are melting faster than the global average ice mass.

What is Black Carbon?

Black carbon is a short-lived climate pollutant with a lifetime of only days to weeks after release in the atmosphere. During this short period of time, black carbon can have significant direct and indirect impacts on the climate, the cryosphere (snow and ice), agriculture and human health. 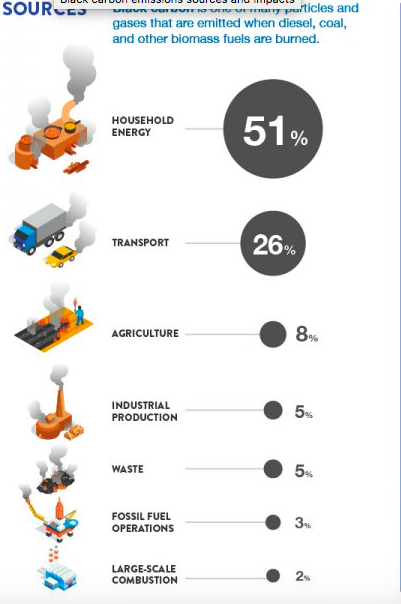 Black carbon is an important contributor to warming because it is very effective at absorbing light and heating its surroundings. Per unit of mass, black carbon has a warming impact on climate that is 460-1,500 times stronger than CO2.

When suspended in the atmosphere, black carbon contributes to warming by converting incoming solar radiation to heat. It also influences cloud formation and impacts regional circulation and rainfall patterns.

When deposited on ice and snow, black carbon and co-emitted particles reduce surface albedo (the ability to reflect sunlight) and heat the surface. The Arctic and glaciated regions such as the Himalayas are particularly vulnerable to melting as a result.

Black carbon and its co-pollutants are key components of fine particulate matter (PM2.5) air pollution, the leading environmental cause of poor health and premature deaths.

At 2.5 micrometres or smaller in diameter, these particles are, many times smaller than a grain of table salt, which allows them to penetrate into the deepest regions of the lungs and facilitate the transport of toxic compounds into the bloodstream.

PM2.5 has been linked to a number of health impacts including premature death in adults with heart and lung disease, strokes, heart attacks, chronic respiratory disease such as bronchitis, aggravated asthma and other cardio-respiratory symptoms. It is also responsible for premature deaths of children from acute lower respiratory infections such as pneumonia.

IMPACTS ON VEGETATION AND ECOSYSTEMS

Black carbon can affect the health of ecosystems in several ways: by depositing on plant leaves and increasing their temperature, dimming sunlight that reaches the earth, and modifying rainfall patterns.

Changing rain patterns can have far-reaching consequences for both ecosystems and human livelihoods, for example by disrupting monsoons, which are critical for agriculture in large parts of Asia and Africa.