An agreement reached by U.S. President Joe Biden and German Chancellor Angela Merkel will allow for the completion of the Nord Stream 2 pipeline, enabling Russia to transport natural gas directly to western Europe. 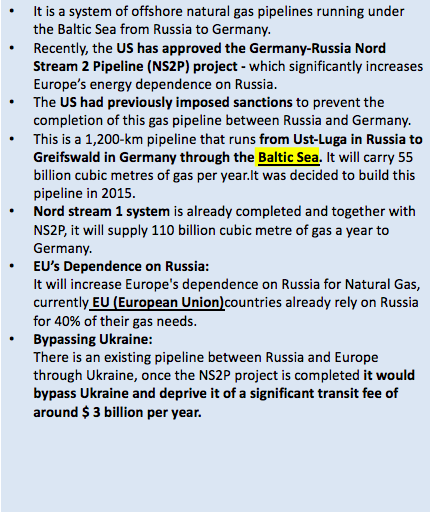 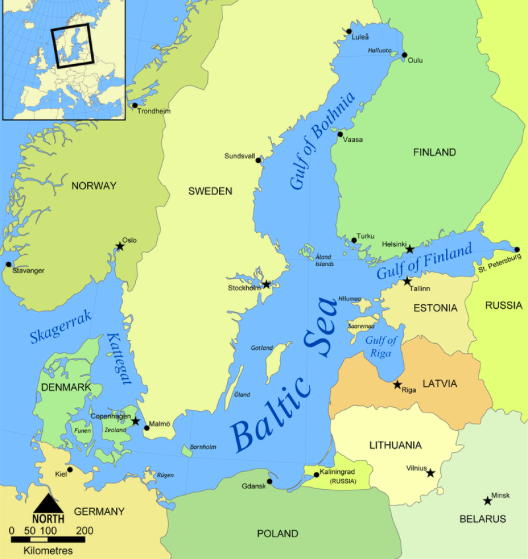 •Baltic Sea, an arm of the North Atlantic Ocean,  is bound by the Scandinavian Peninsula, the mainland of Northern Europe, Eastern Europe and Central Europe, and the Danish islands.
•The Baltic Sea is artificially linked to the White Sea by the White Sea Canal and to the North Sea by the Kiel Canal.
•It includes the Gulf of Bothnia, the Bay of Bothnia, the Gulf of Finland, the Gulf of Riga, and the Bay of Gdańsk.
•The largest expanse of brackish water in the world, the semienclosed and relatively shallow Baltic Sea is of great interest to scientists, while to historians it represents the economic core of the Hanseatic League, the great medieval trading group of northern European ports.
•The Baltic Sea is surrounded by nine countries: Denmark, Germany, Poland, Lithuania, Latvia, Estonia, Russia, Finland and Sweden.
•As a long-term average the Baltic Sea is ice covered for about 45% of its surface area at maximum annually. The ice-covered area during such a normal winter includes the Gulf of Bothnia, the Gulf of Finland, Gulf of Riga and Vainameri in the Estonian archipelago
Places in News