Finance Commissions generally submit their reports for a five-year duration. The 15th Finance Commission, however, was given an extension of a year due to uncertainties in key macro areas (new monetary policy framework, GST, bankruptcy code, demonetisation, etc.). Its interim report for FY 2020-21 was, therefore, tabled in Parliament along with Budget 2020-21 and their final report for FY 2021-22 to FY 2025-26 was tabled along with the  Budget 2021-22.

XVFC is mandated to give recommendations regarding

The Commission shall review the current fiscal status of the Union and the States, and recommend a fiscal consolidation roadmap. The Commission may also examine whether revenue deficit grants be provided at all.

While making the recommendations, the XV-FC may consider

The Commission considered proposing performance-based incentives to the States based on:

The 14th FC used the additional criterion of  forest cover and population in 1971. 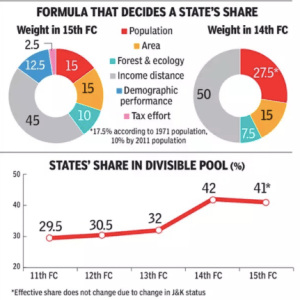 The government has accepted the Fifteenth Finance Commission recommendation to maintain the States’ share in the divisible pool of taxes to 41% for the five-year period starting 2021-22, and given an ‘in-principle’ nod to the panel’s suggestion to set up a separate non-lapsable fund for defence and internal security modernisation.